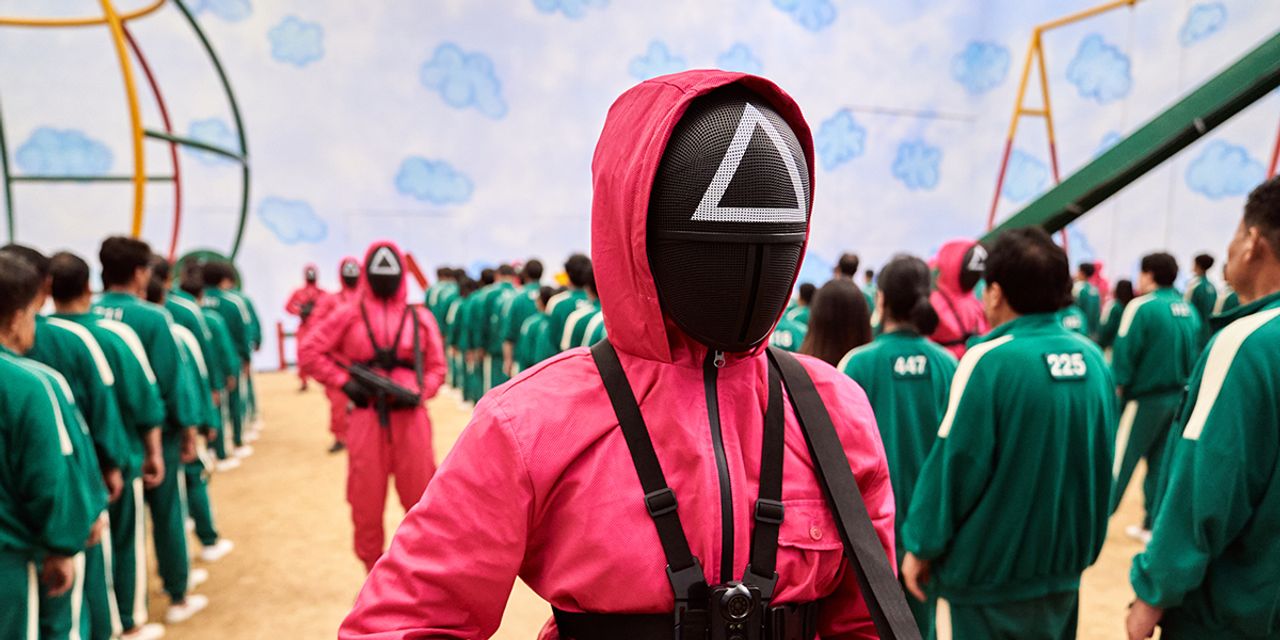 biggest hit ever. But for a decade, local studios rejected the fictionalized show’s pitch as too grotesque and too unrealistic.

The premise revolves around financially broke adults playing traditional Korean children’s games on a secluded island. The losers die. A single winner emerges with a cash prize of about $40 million.

Now “Squid Game,” which made its debut Sept. 17, is a global phenomenon. TikTok videos of people replicating the children’s games have gone viral, while online retailers are rushing to sell “Squid Game” Halloween costumes. The show has hit No. 1 in more than 90 countries, including the U.S.—a surprise even to Netflix executives.

By every metric, the Korean survival drama is on pace to surpass Netflix’s current record holders—“Bridgerton” and “Lupin”—in the total volume of hours watched and the number of subscribers who have tuned into the show for at least two minutes, said

who oversees the company’s creative activities in the Asia-Pacific region except for India.

Despite its sudden success, “Squid Game” represents a payoff from Netflix’s multiyear bet on South Korean content. The U.S. streaming giant invested about $700 million for Korean films and television shows from 2015 to 2020, the company says. This year alone, Netflix plans to spend half a billion dollars.

That compares with about $400 million earmarked for India content in 2019 and 2020, and the roughly $17 billion Netflix is spending on content world-wide this year.

The popularity of “Squid Game” comes as Netflix faces unprecedented competition, with rival streaming services seeking original hits that can grab eyeballs across continents to distinguish their offerings.

came up with the idea for the show more than a decade ago, while living with his mother and grandmother. He had to stop writing the script at one point: He was forced to sell his $675 laptop for cash.

Back then, potential investors and actors bristled at the brutal killings and implausibility of individuals competing to the death for money. But two years ago, Netflix thought the class struggles outlined in “Squid Game” spoke to reality.

When the Covid-19 pandemic hit the global economy, it exacerbated the disparity between the rich and the poor, said the 50-year-old Mr. Hwang. Even vaccine rollouts vary greatly based on whether a country is wealthy or not, he said.

“The world has changed,” Mr. Hwang said. “All of these points made the story very realistic for people compared to a decade ago.”

Buzz built quickly. The Netflix trailer for “Squid Game” on YouTube has already amassed more than 14 million views—more than double that of “Bridgerton” or “Lupin.”

South Koreans have celebrated the milestone of “Squid Game” becoming the country’s first show to hit Netflix’s top spot in the U.S. and globally. Local media have labeled it the next “Parasite,” the Oscar-winning film. References to the show have even entered South Korea’s presidential election race, with some candidates making parody posters or challenging each other to “Squid Game”-like competitions.

“I was surprised to hear the show did so well outside of Korea and thought maybe the popularity of K-pop made more people interested in Korean content,” said 27-year-old Kwon Se-un, a cafe worker. “The merciless killings were attention grabbing and the range of different characters made it interesting.”

“Squid Game” went through some primping to become a global megahit. With a potential language barrier, Netflix emphasized visuals, outfitting competitors in green tracksuits and building colorful sets resembling children’s playgrounds. Some of the rules for the traditional Korean games were simplified or altered.

Many Americans also enjoy watching foreign shows with English-language dubbing, rather than subtitles—a choice that Netflix’s algorithms can automatically select for users based on their past viewing.

Korean dramas have long had a large fan base across Asia and have been seen in Europe, Latin America and the U.S. through other streaming services such as Viki Inc. and the now-defunct DramaFever Corp. But those rivals didn’t produce much big-budget, original content or boast the streaming reach of Netflix, which began its South Korean efforts in 2016.

Since then, Netflix has introduced about 80 Korean films and series, and U.S. viewing of K-dramas has doubled in the past two years, Netflix said.

Previous Korean hits, available on Netflix and elsewhere, typically center on boy-meets-girl love stories or Cinderella-esque tales of the wicked elites—and often weave in both. Some of Netflix’s prior K-drama successes followed that playbook, including “Crash Landing on You,” a 2019 show in which a South Korean heiress lands in North Korea during a paragliding accident.

But more recent shows began to break the mold, winning broader audiences than the K-drama die-hards. For instance, “Sweet Home,” an apocalyptic suspense series released last year, reached No. 3 on Netflix in the U.S.

About 95% of “Squid Game” viewers are outside South Korea. It has been subtitled in 31 languages and dubbed in 13, Netflix said.

Netflix’s Ms. Kim said that the show, though very Korean, has more universal appeal because it poses a simple moral question: “Who are we?”

“We are not horses, we’re all humans,” she said. “That is the question the show really wants to throw at you.”

Are you a “Squid Game” fan? Join the conversation below.

a 22-year-old university student in Singapore, had never watched a Korean drama, but urged by friends—and Netflix’s suggestions—she watched the trailer and wondered why the desperate contestants turned on each other. “Squid Game” reminded her of “The Hunger Games,” another brutal survival tale.

“I watched the entire series in one sitting,” she said.

“Squid Game” is a story of underdogs, relatable for people who struggle, that resonates with younger audiences, much like how the K-pop band BTS became a voice for millennials, said

head of theater and performance studies at the University of California, Los Angeles.

“Korea is no longer an exotic site where only a certain dedicated fandom culture exists,” said Prof. Kim, who has written a book about South Korea’s music industry. “It’s a major cultural hub with rising prominence in Hollywood and on Billboard charts.”

Write to Dasl Yoon at dasl.yoon@wsj.com and Timothy W. Martin at timothy.martin@wsj.com